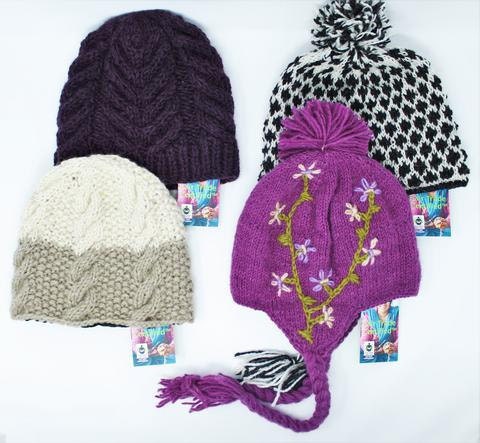 An interesting fact about knitting is that although it is one of the oldest forms of fabric making, it is difficult to trace the exact origin. Given in antiquity knitters used only natural fibers like cotton, silk, and wool we have very few well-preserved artifacts due to the nature of the material to decompose quickly, hence making it very rare commodity for archeologists to come across.In the first several hundred years of knitting, wool was scarce but cotton and silk were easily accessible. Due to the natural insulation features of wool, it became the material of choice for winter knitted clothing and even today woolen knitwear is synonymous with winter.

The earliest records of knitting are from the Middle East between the 3rd and 5th centuries. One of the first knit items is a pair of woolen socks from Egypt that was created using a similar technique to knitting called “nalbinding.” (smithsonianmag.com)Records also show that knitting was practiced in Peru in the 3rd century. Items of clothing created using actual double-needle knitting, as we know it today, were first seen in Africa between the 11th and 13th centuries.The Crusades in the Medieval ages introduced this art form to Spain and Europe. Soon after the Arabs brought knitting to Spain, and it quickly spread throughout Europe. Knitting reached Britain in the 16th century and the Scottish isles in the 17th century. Knitted woolen sweaters were a practical favorite for the fishermen here, and they soon began to experiment with innovative patterns and designs.

Hand knitting became a popular method to produce warm clothing for chilly winters and was used to produce woolen clothes like sweaters, hats, and socks all over Europe. The Cappers act of 1571 that made the wearing of knitted caps compulsory in England demonstrates the importance of wool knitted clothing in the societies of the time.In Victorian England, the growing interest in knitting elevated to the status of an art form among wealthy ladies who dedicated efforts to refining the methods employed. They experimented with intricate patterns, complicated stitches, and pretty color combinations to produce functional and beautiful pieces of clothing with woolen yarn.

During the first world war, woolen sweaters, socks, and scarves were hand-knitted for British soldiers at war. The public once again pitched in and used knitting to create warm clothing for their troops during the second world war.Although there was a decline in interest for knitted woolen clothing when cheap machine-made sweaters and caps flooded markets towards the end of the 20th century, it was temporary. Renewed interest in handmade items and artisan products saw knitwear rise to popularity again, and it continues to be a winter staple to this day. William Lee of Calverton invented the first stocking frame in 1589 that mechanized the entire process. Today, there are knitting machines that produce knitwear quickly and easily. However, they are incapable of achieving the beautiful details and finesse of handmade knitted items. Whether it is chunky knits and warm cardigans or whimsical beanies and cozy gloves, handmade wool knitted clothing adds character to any outfit, hence it is always superior to homogenous mass-produced woolen clothing.